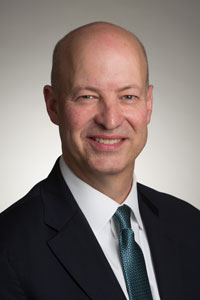 Getting to Know Joel Black
Joel Black was named chair of the GASB effective July 1, 2020. His seven-year term concludes June 30, 2027.

Prior to joining the GASB, Mr. Black was the partner in charge of the audit practice at the accounting firm Mauldin & Jenkins, LLC, in Atlanta.

In that capacity, he oversaw the audit practice of the firm’s eight offices throughout five states, including the work of more than 300 employees. Mr. Black also led the firm’s government professional practice group covering more than 400 public sector clients. He led engagements for diverse government clients from communities of fewer than 10,000 residents to states and state agencies, large counties and cities, school districts, and special-purpose entities with multibillion-dollar budgets.

Mr. Black joined Mauldin & Jenkins in 2004 as a director. He was named partner in 2005 before his appointment to partner in charge of the audit practice in January 2019.

Mr. Black has been active in numerous professional activities concerning government accounting. He was appointed to the GASB’s Governmental Accounting Standards Advisory Council (GASAC) in 2019. He served on the American Institute of Certified Public Accountants’ (AICPA) State and Local Government Expert Panel from 2015–2019 and its Government Audit Quality Center Executive Committee from 2012–2015.

Mr. Black, a graduate of Georgia State University, is a certified public accountant.